We couldn't be more grateful for all of our incredible Nurses across Morecambe Bay, who go above and beyond every single day to care for our patients.

To celebrate and recognise our amazing nurses, we will be sharing photos, case studies, special messages, thank you's and quotes which showcase just how appreciated Nurses are by colleagues, patients and the public.

Find out more by searching Nurses Day or #BestOfNursing on social media. 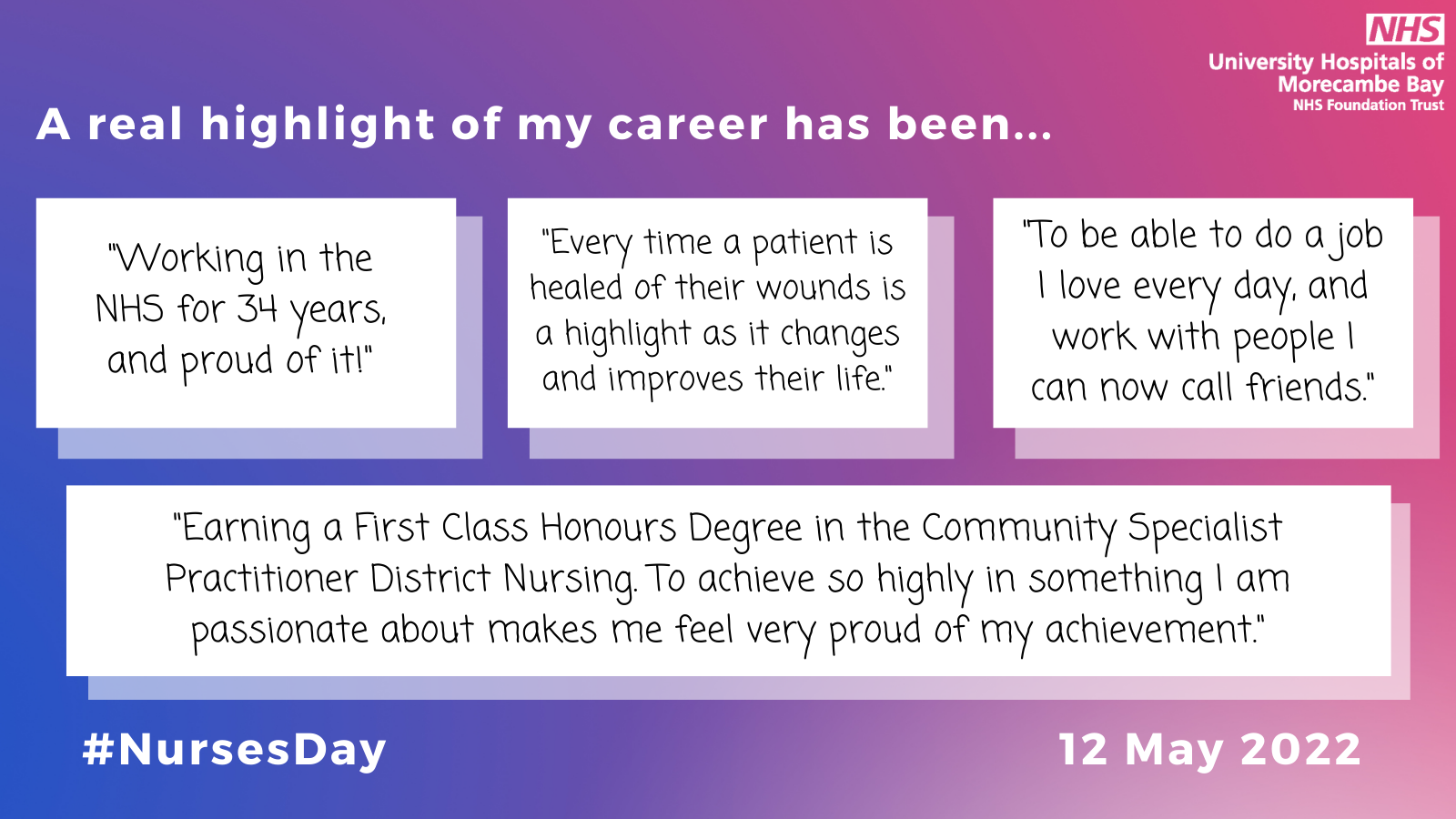 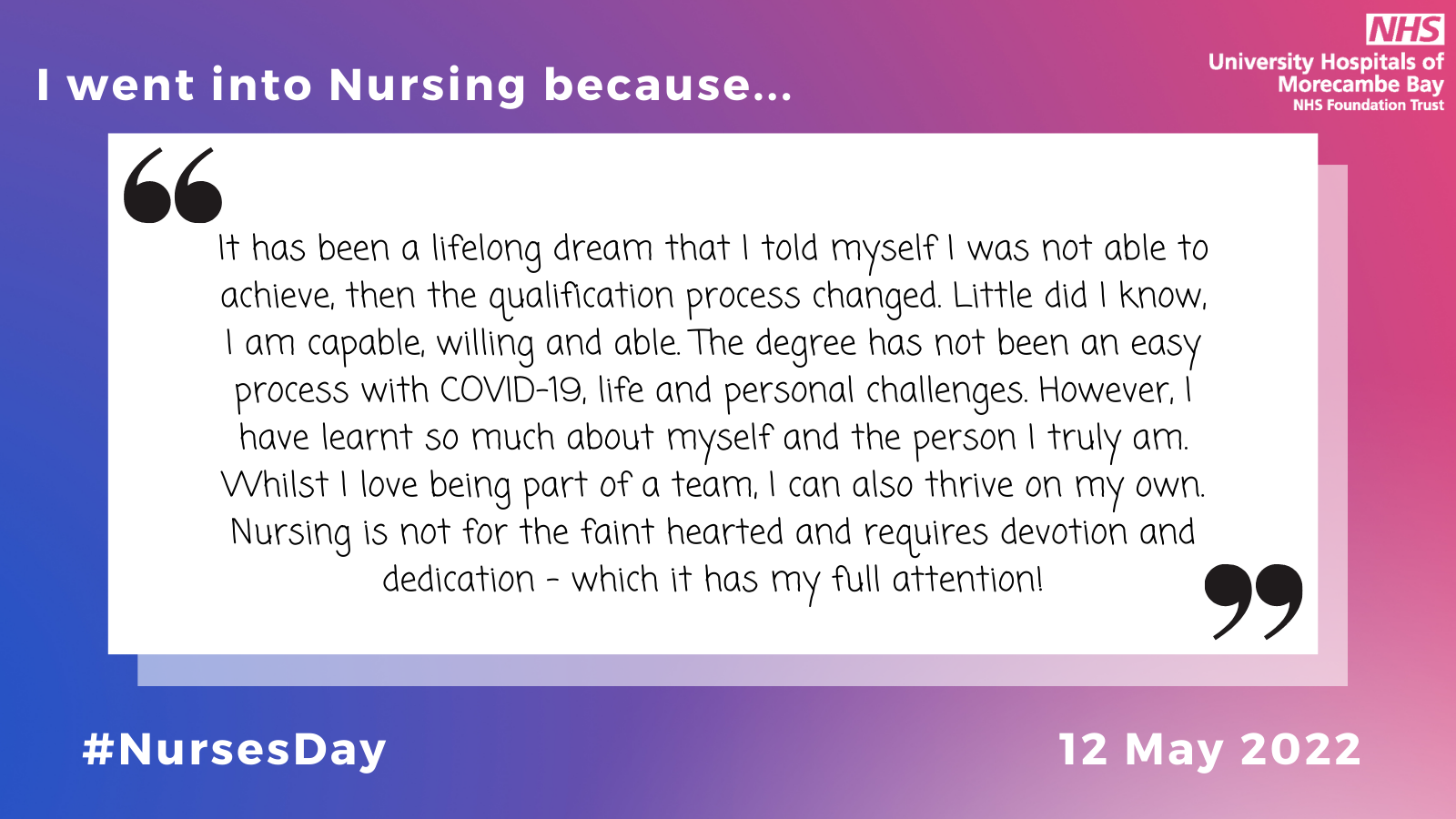 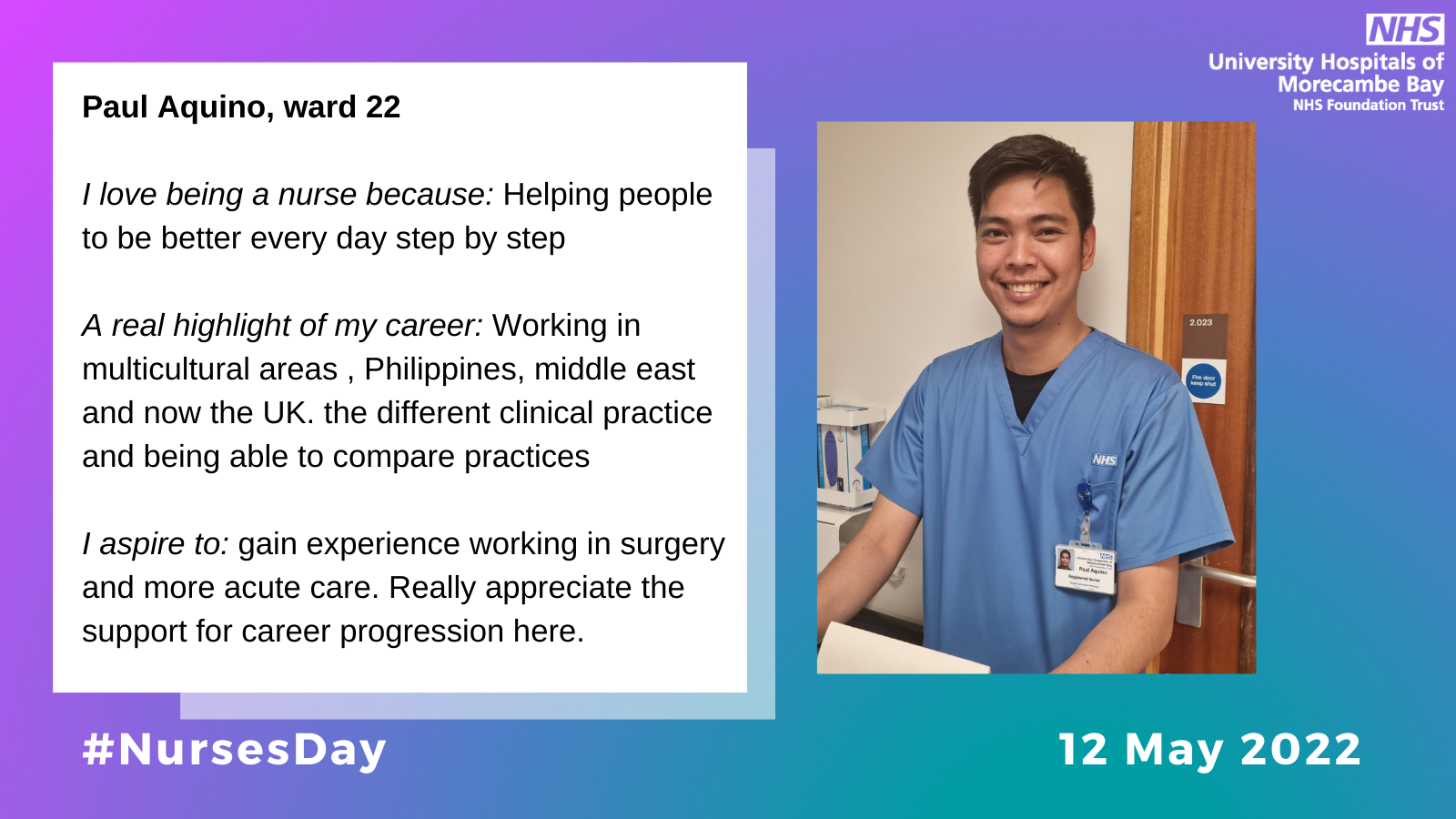 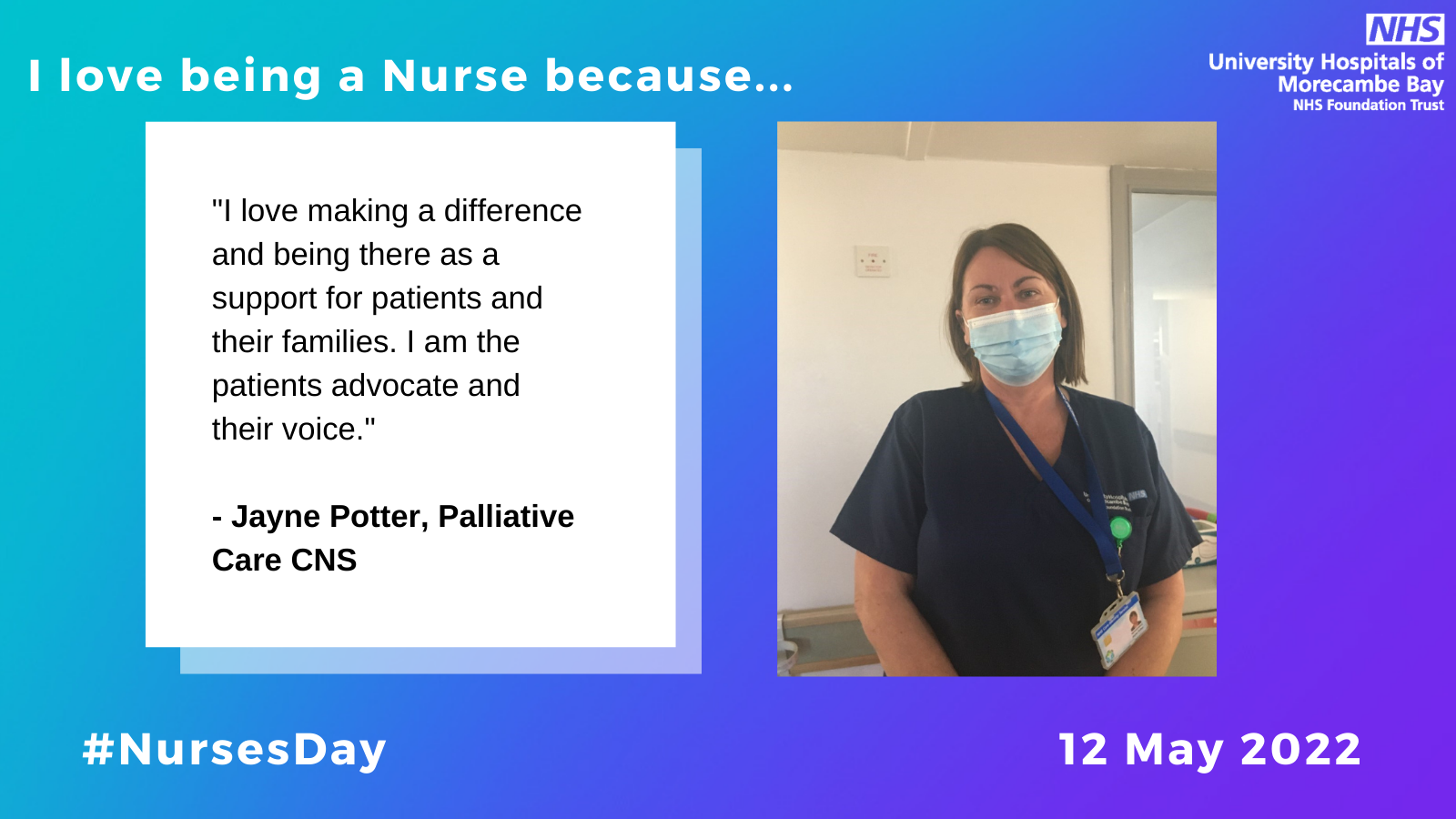 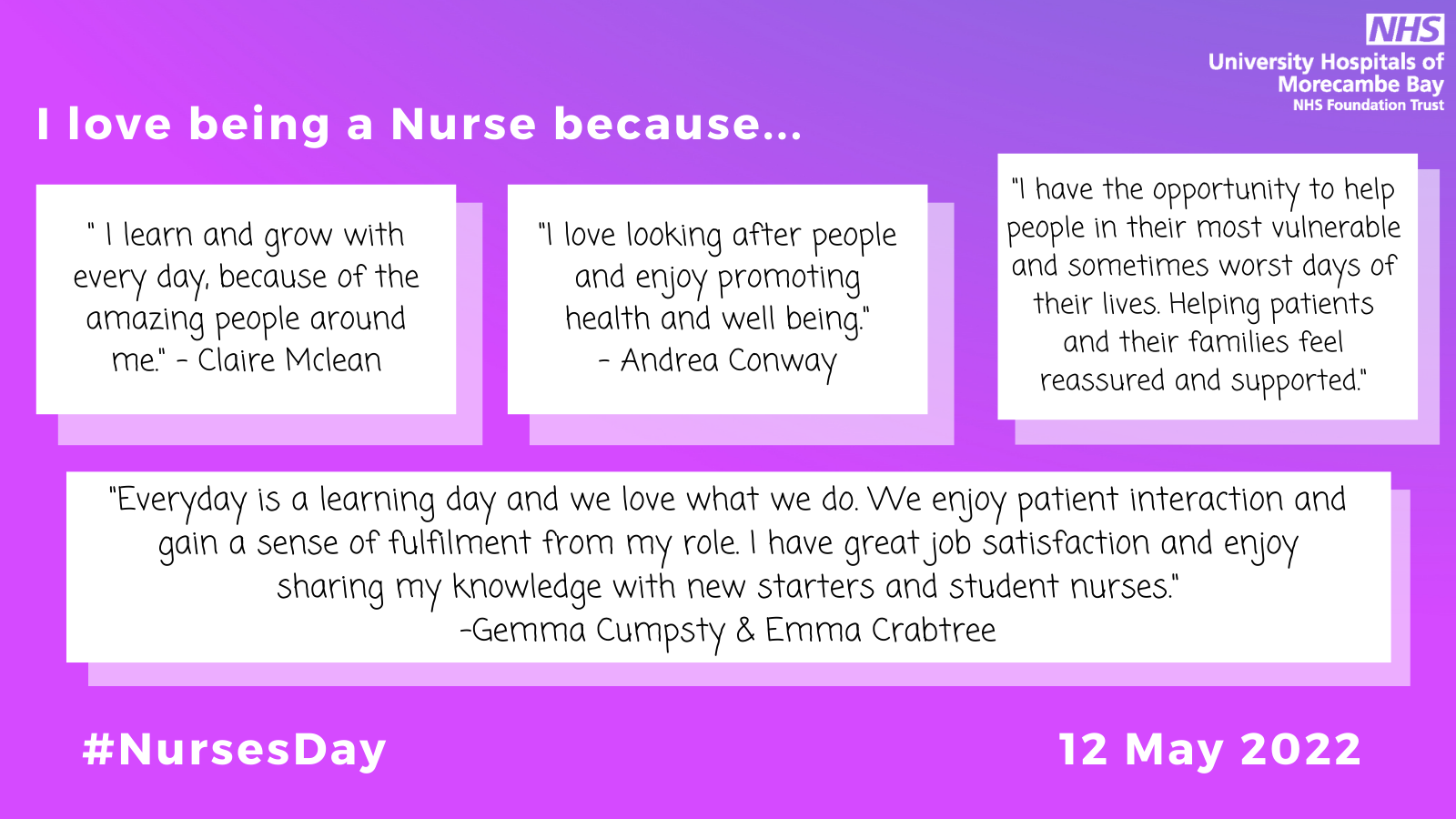 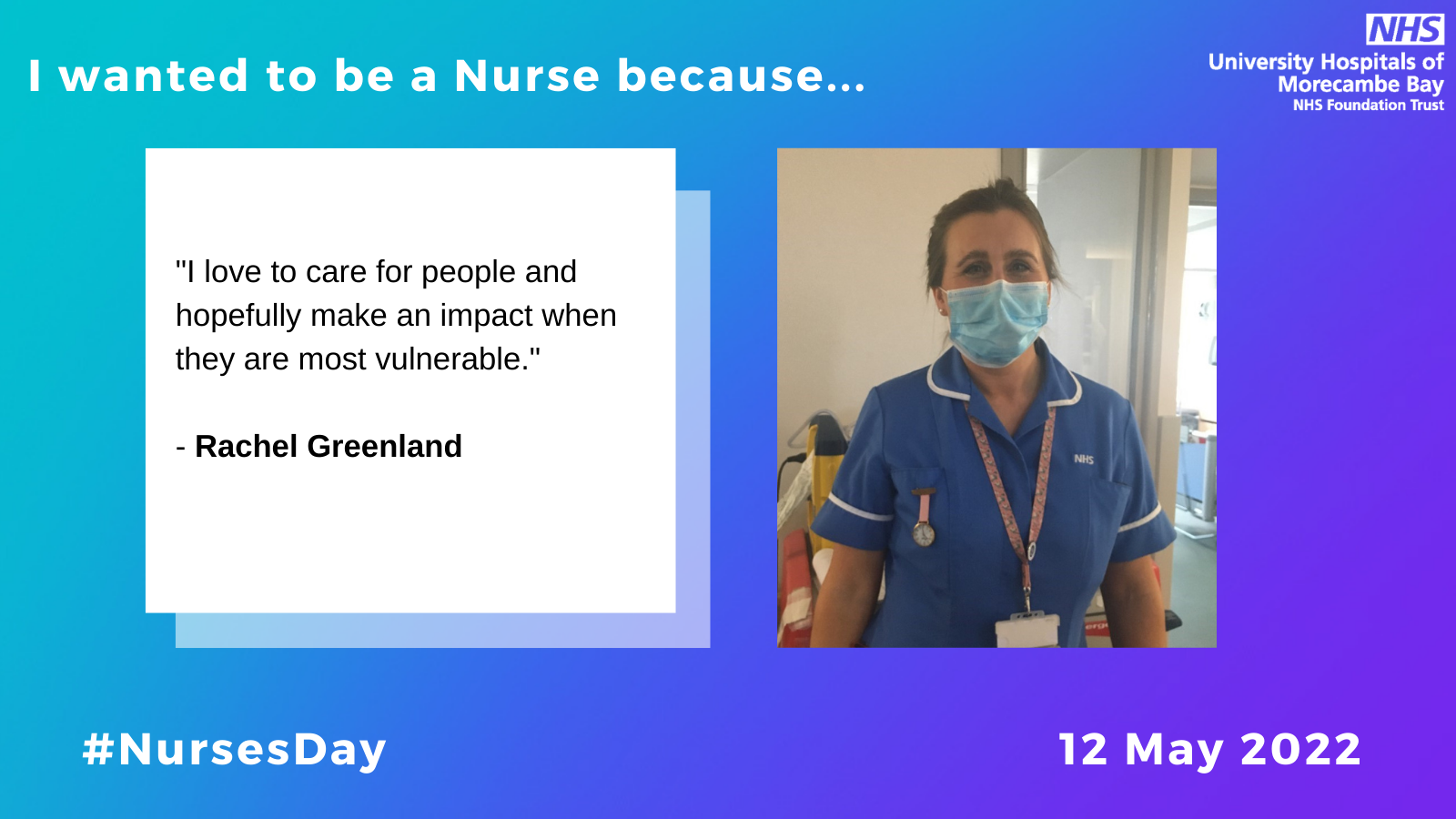 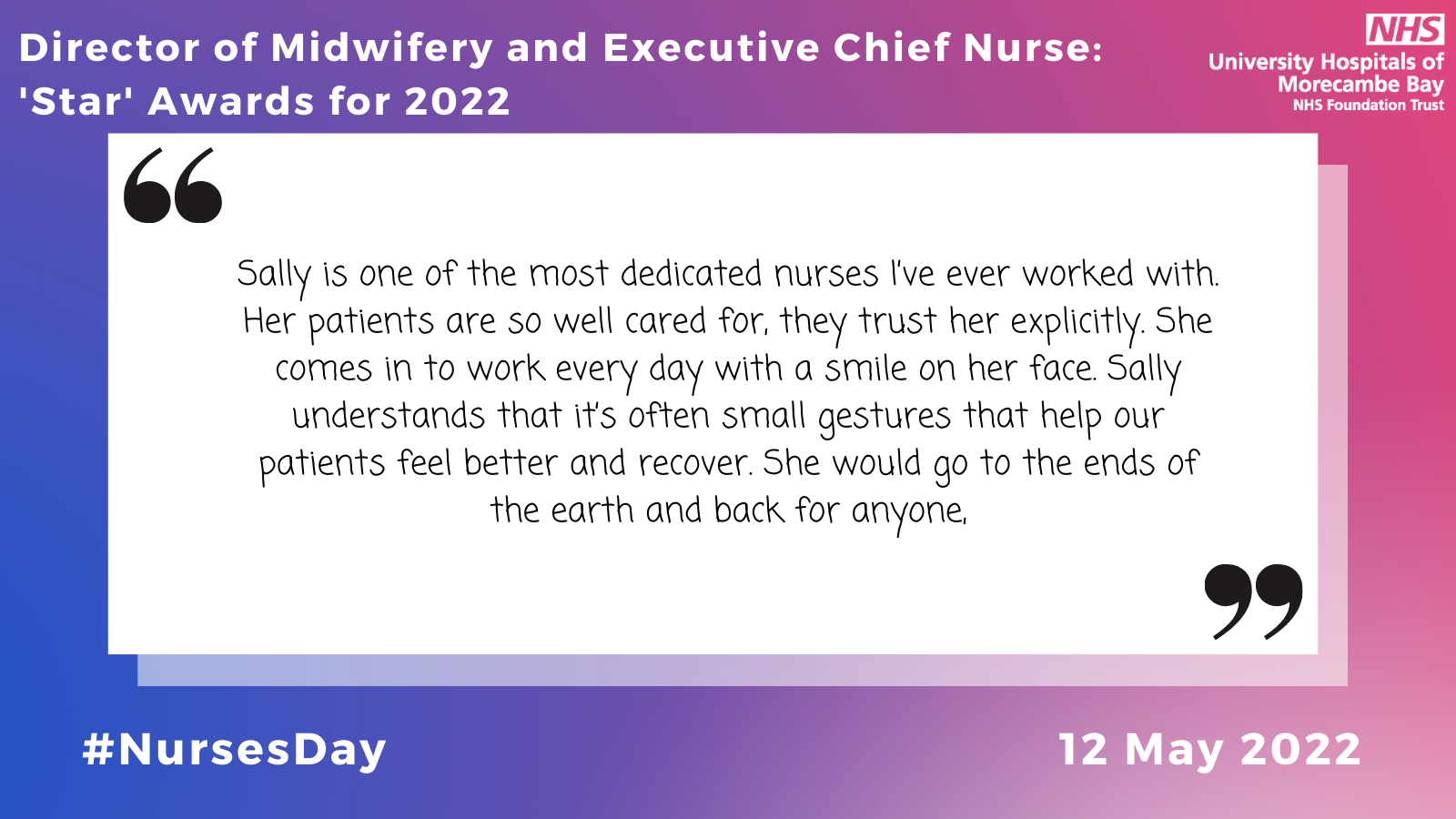 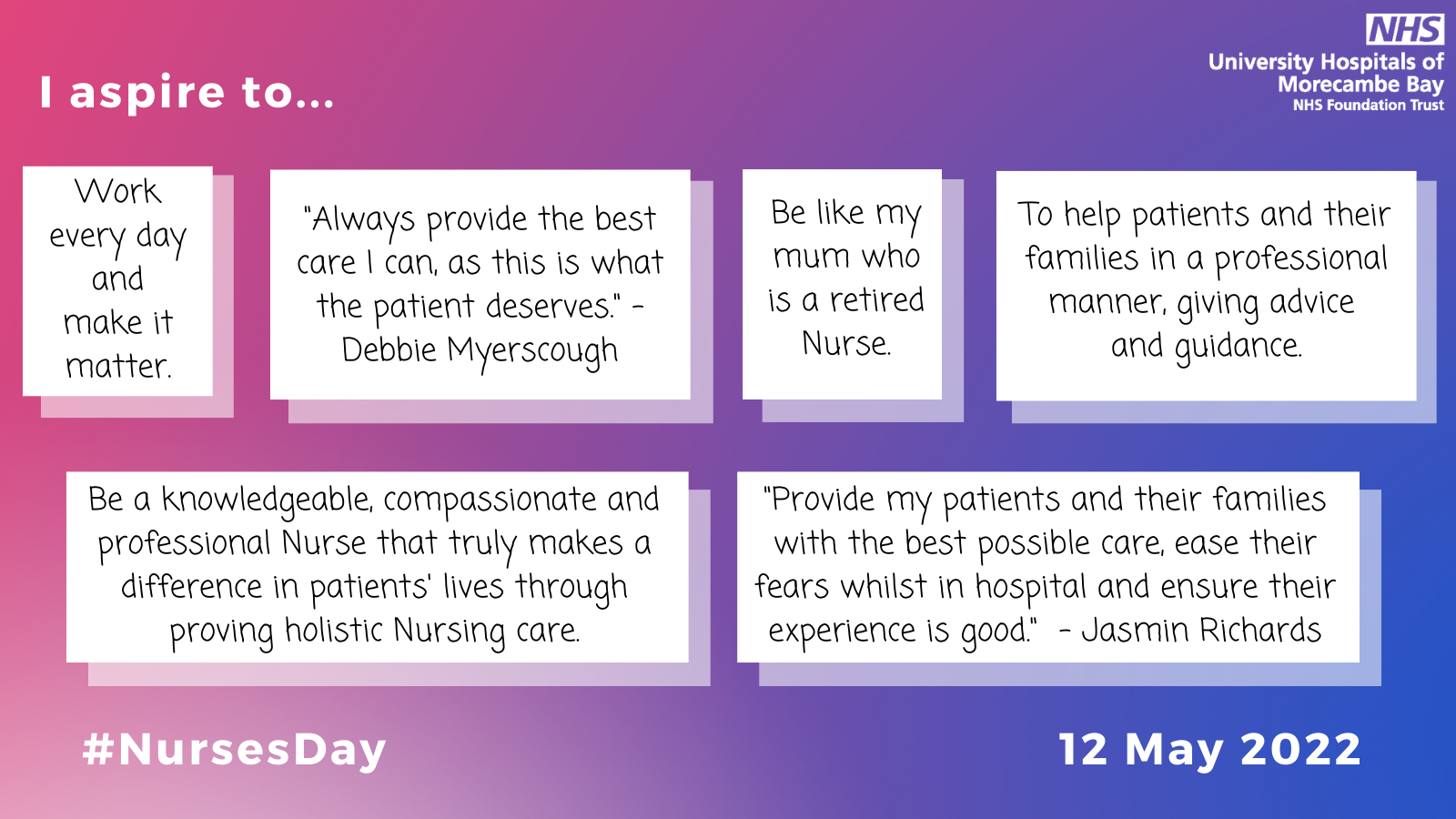 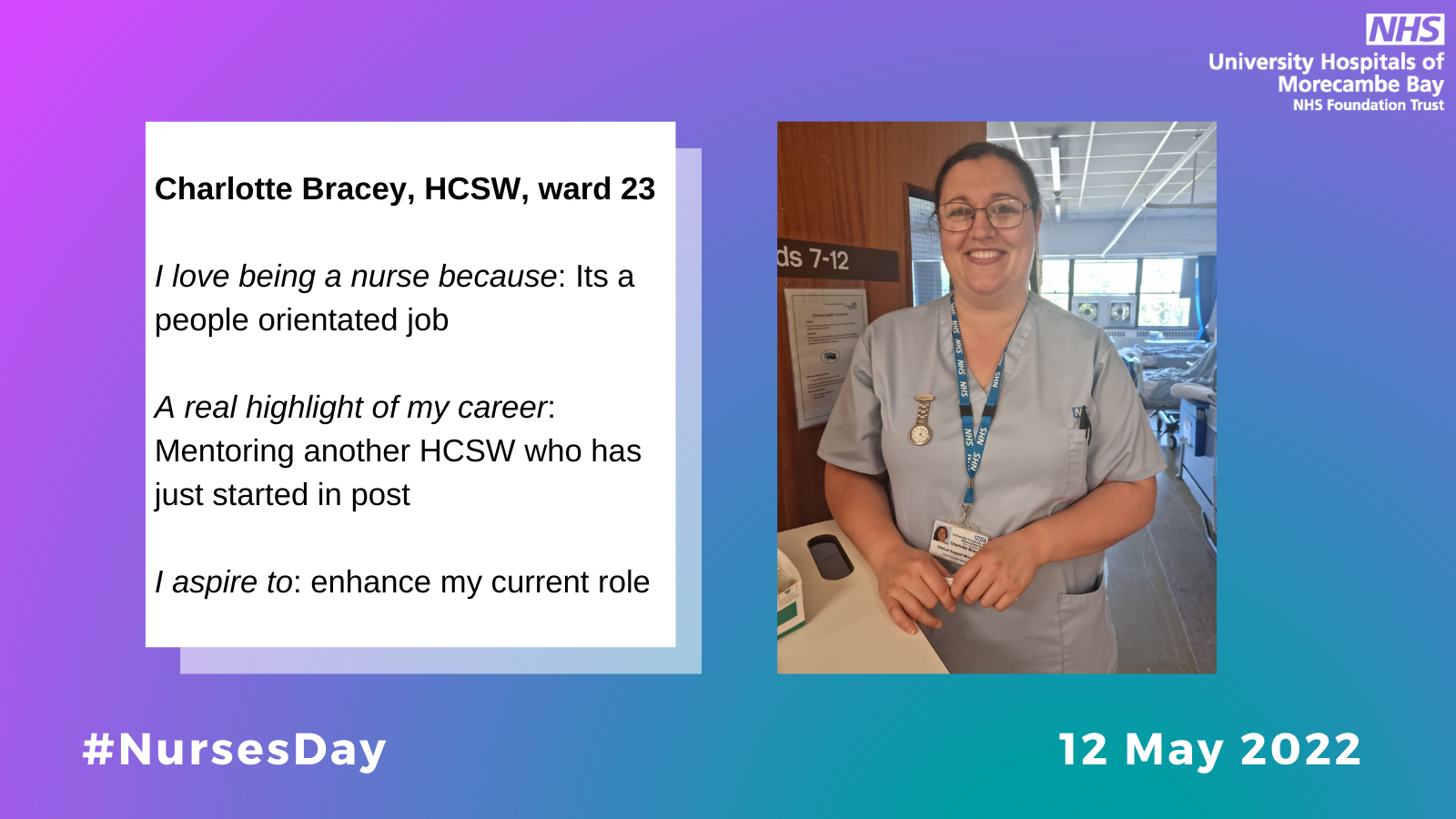 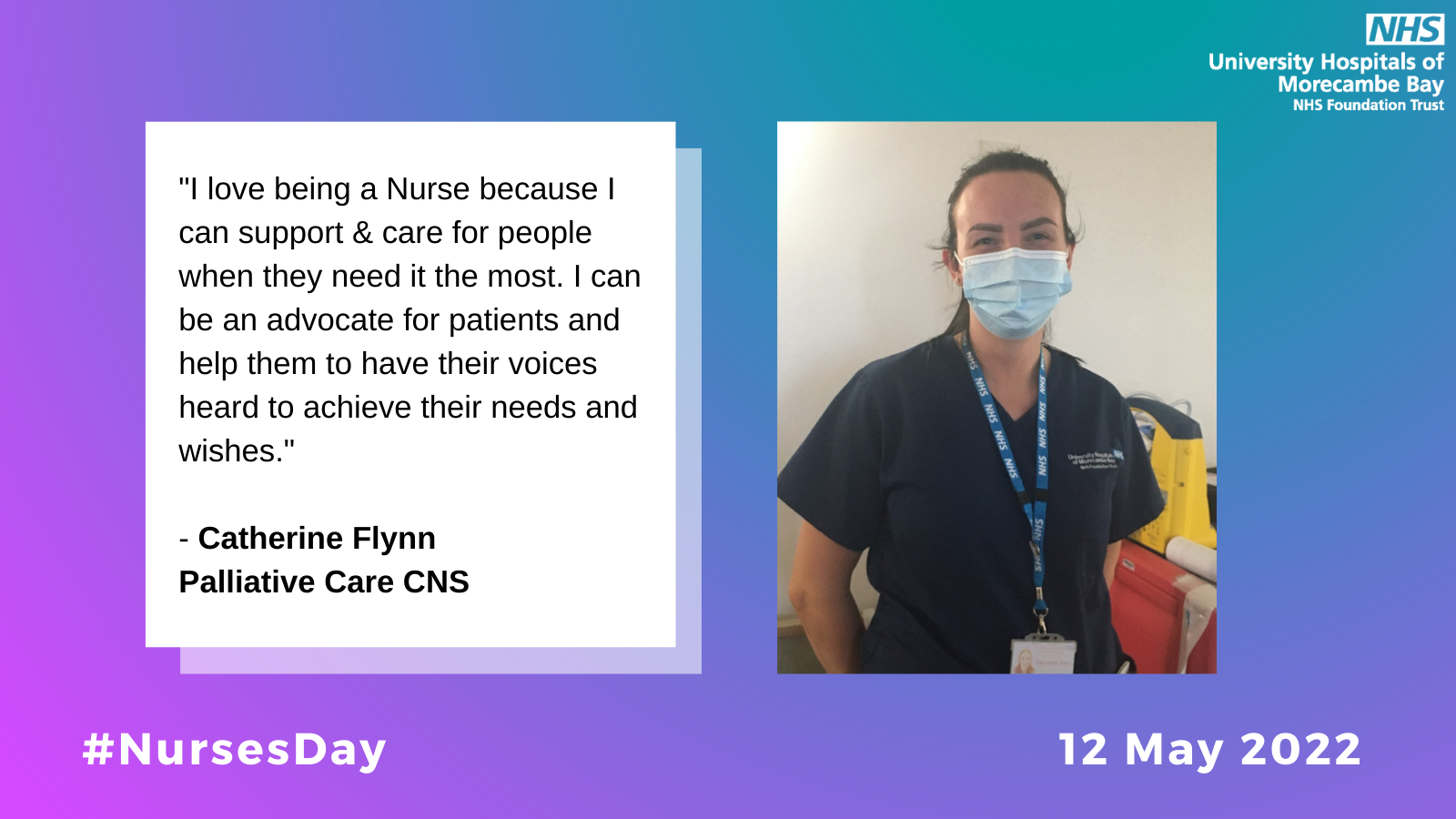 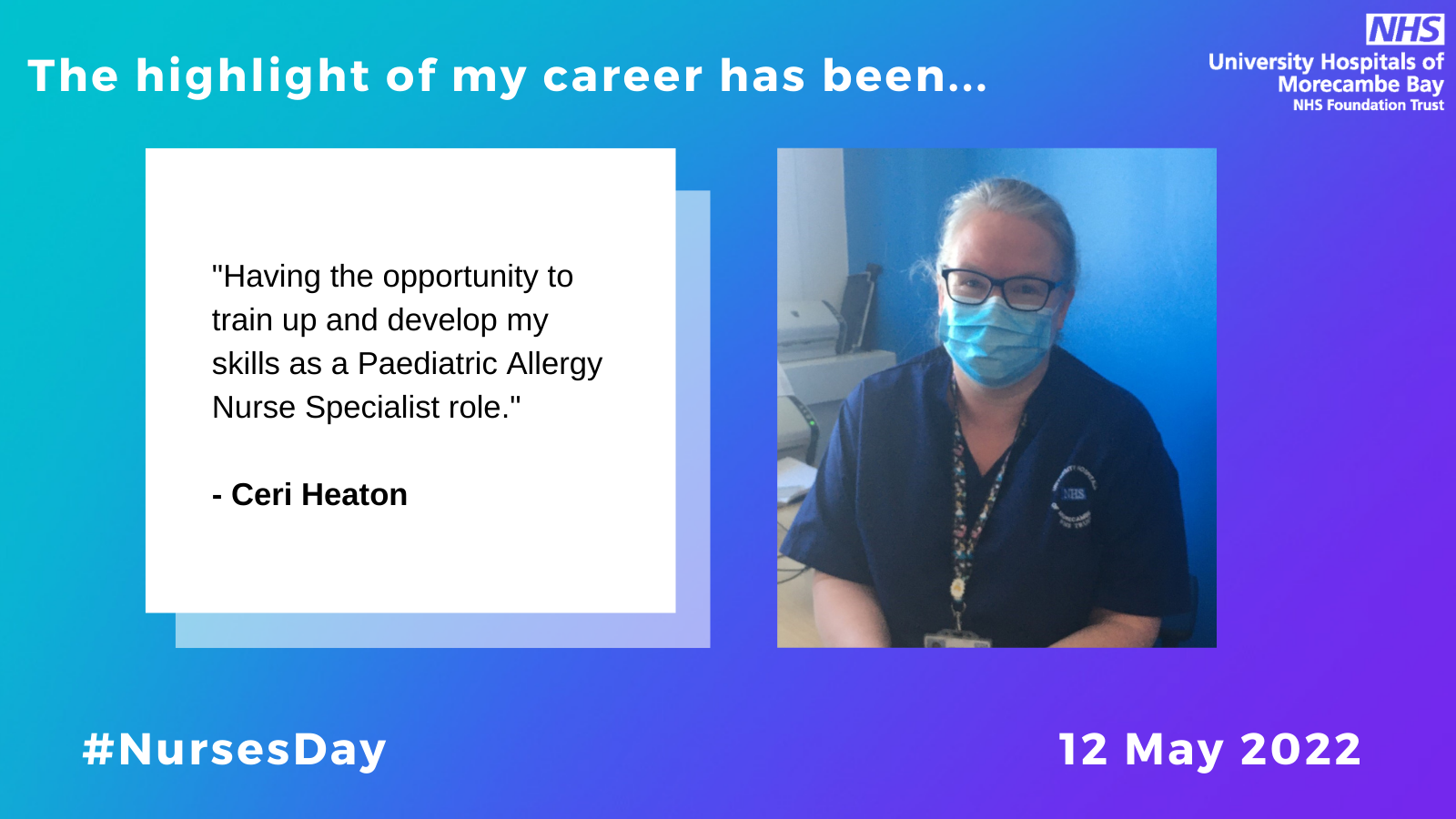 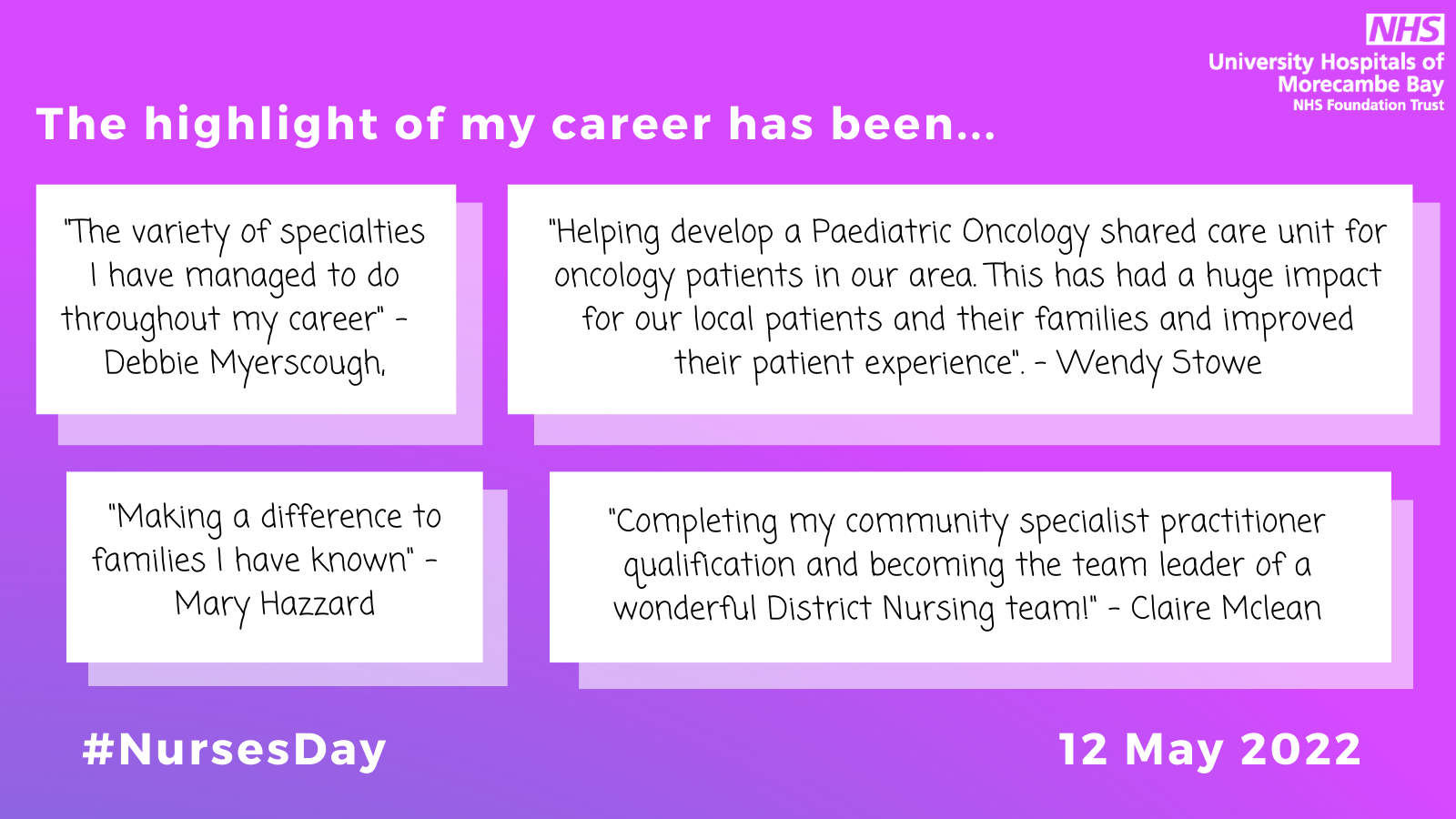 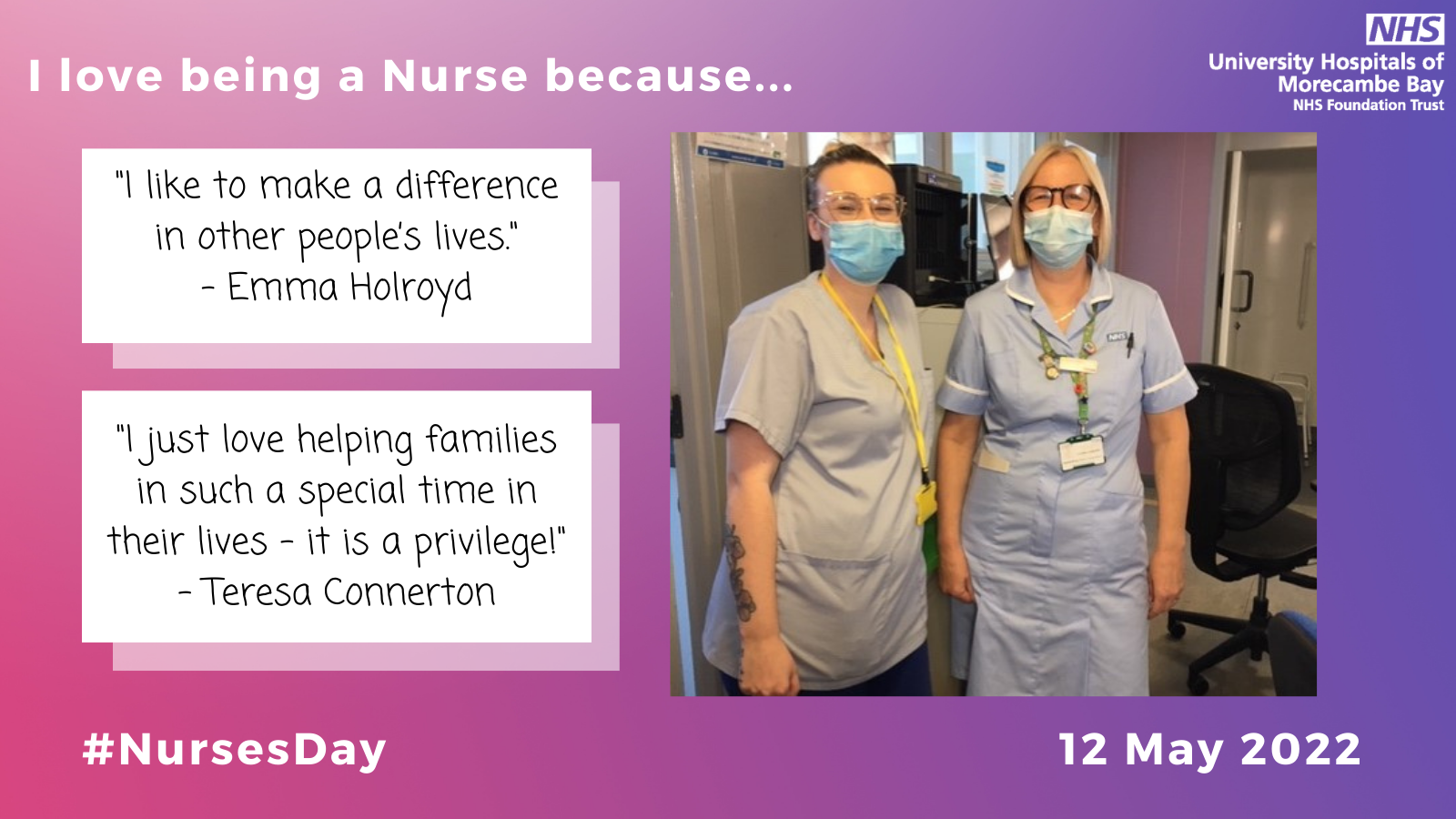 Pre-pandemic UHMBT launched the latest NEWS2 sepsis risk tool and Fiona Ryder then Matron for medicine at FGH was delighted that our team in the community care group was the first to use the tool in UHMBT. We know that using the NEWS2 tool has literally saved lives since it was implemented.

Our team was chosen as suitable to host the one years placement of a Community Specialist Practitioner student ( a District Nurse in training) not every team is suitable.

I am proud that our team are good enough and regard it as a massive vote of confidence in how we work as a whole team, it reflects well on all of us.

We have all worked tremendously hard to achieve the standards required. It is very much a team approach.

During COVID, the podiatry team were unable to attend nursing homes. The TVN’s across Furness partnered with podiatry to undertake joint virtual reviews of the patients, sharing photographs and discussing and agreeing treatment plans. This allowed the nursing staff within the homes to deliver excellent care to their patients. The relationships have continued between the services improving service delivery for patients across Furness.

The district nursing teams across Furness have started to attend a virtual diabetes foot MDT to discuss any issues with diabetic wound care. This has improved the relationships between the teams, allowing seamless and coordinated care for our patients, improving their outcomes and reducing waiting times.

On 29th October 2021 AC was referred to SLRR for IV therapy to treat widespread infection to her aortic graft site. AC has an extensive PMH and is a current patient on the SLRR caseload who we have got to know well. This is her case study.

Back in 2009 AC started with Leg claudication pains and an MR angiogram scan showed aortic and bilateral occlusions from the level of renal arteries to groins. At the time AC was a smoker, hx of COPD, normal renal function/bloods.

Following multiple discussions around the risky surgery AC had an Aorto bifemoral graft in October 2009 and post op was successful with AC making a full recovery.

In Jan 2020 AC started with the same pains again and couldn’t walk more than 50-100 yards. In June 2020 she was taken to Preston where she had aorto-bifemoral graft reversal with R axillofemoral bypass following a scan which showed further occlusion and L groin infection. AC developed compartment syndrome in July 2020 and was readmitted for release fasciotomy surgery. AC was initially seen by SL IRRS in Sep 2020 for 2 IV doses following dx from FGH, she was then switched to oral abx. Whilst on oral abx AC developed an abscess to her R chest wall and had this drained twice with GP.

In August 2021 AC developed a raw L groin area and was referred back to vascular. Vascular clinic saw her in Sep 2021 and conducted chemical cauterisation on the area and was managed with dressing therapies.

AC was seen again in Preston with vascular on 18th October 2021 with ongoing dx from R chest wall abscess and L groin wound and advised widespread infection of graft. AC was treated with IV meropenem for 10/7 as an inpatient and was dx home on 29th October 2021 on IV ertapenem and referred to SLRR for 6/52 of OPAT support.

During the first 2/52 of IV therapy AC was low in mood, in pain, reluctant to engage and withdrawn. AC reported she had a tough time in FGH and struggled being away from home for 3 months. We initially saw to AC between 30/10/21 – 10/01/2022 and gave 86 doses of IV Ertapenem as prescribed. Through-out her therapy, AC warmed to our service and we were able to support AC more; she valued our knowledge and became confident in our service. During this time the abscess site to AC R side deteriorated, developed further abscess and the graft site was now exposed. As well as this; AC L groin didn’t heal despite our support and intervention; she was reviewed in clinic with vascular and admitted on 11/01/2022 for potential surgery.

AC was referred back to SLRR on 20/1/22 after 9 days in RPH; her first visit was planned on 21/1/22 for further 2/52 course of IV Ertapenem. AC did not have surgery at this admission and was a/w the result from her PET scan and an MDT between vascular and plastics to be held but would likely be facing further surgery. AC was to continue with dressing therapy also to both her R upper abdo graft site and L groin. SLRR supported AC through this and she became more open to discussing her thoughts and feelings and admitting some of her vulnerability, which was a huge stepping stone.

After reviewing her PET scan and MDT between specialities AC was advised surgery and was admitted on 31/01/2022 where she had debridement of exposed axillofemoral bypass graft and coverage; she had a total of 10 doses or IV ertapenem. AC remained an inpatient until 09/02/2022 where she was referred back to SLRR for a further 6/52 course of IV ertapenem. AC abdo wound now closed but L groin wounds remains. On the initial assessment that day AC presented differently despite explaining the surgery had gone well and she was happy with the outcome. AC was tired, in pain and had reduced and altered sensations to her R leg which was reducing her mobility. AC agreed for ACP review and her gabapentin was increased. AC wished not to return to RPH unless absolutely necessary. Despite input it was decided 2/7 later on the 11th Feb AC was to be seen back in RPH due to increased pain, numbness and altered sensations; she had total of 3 further doses of IV ertapenem. AC remained an inpatient until 11th march and had undergone a R above knee amputation due to an occluded R axillo femoral graft; and struggled with phantom pains post op delaying her dx.

On 11/03/2022 SLRR took AC back for further planned 3 months of IV ertapenem. During the following 3/7 AC struggled with phantom pains to her R above knee stump along with increased acute pain to her L leg, reduced sensation to L foot and poor circulation; we gave her a total of 4 ertapenem doses. AC reported she had the same presentation with her L leg and was scared to go back to RPH as didn’t feel she was ready to face the potential of further amputation. AC pain was not well controlled despite her analgesia doses and after multiple discussions/reviews with CHOC, RPH and family over the day’s AC agreed to go back into RPH on 14/03/22 for urgent review with vascular.

During this time AC had chemical sympathectomy to control her pain. She was taken to theatre 30/3/22 for urgent exploration of femoral graft and found to have narrowing vessels in her pelvis. During admission AC had a blood transfusion when her HB dropped to 6.6. Her L groin wound is now healed; however, AC now has an open wound to her R groin following surgery which was initially being treated with VAC therapy.

AC remained an inpatient until 24/4/22 and was referred back to SLRR for a further 6/52 course of IV therapy.

During the 6 months we have supported AC we have prevented approx. 106 bed days in RPH, given over 106 doses of IV therapy, provided and managed wound care which has alleviated the need for district nurse input and supported with therapy input.

The most rewarding of all has been the support we have provided emotionally and as a team we have built up a trusting relationship with AC who has continued to engage with us; value our advice and confide in us during what has been a very difficult time in her life.